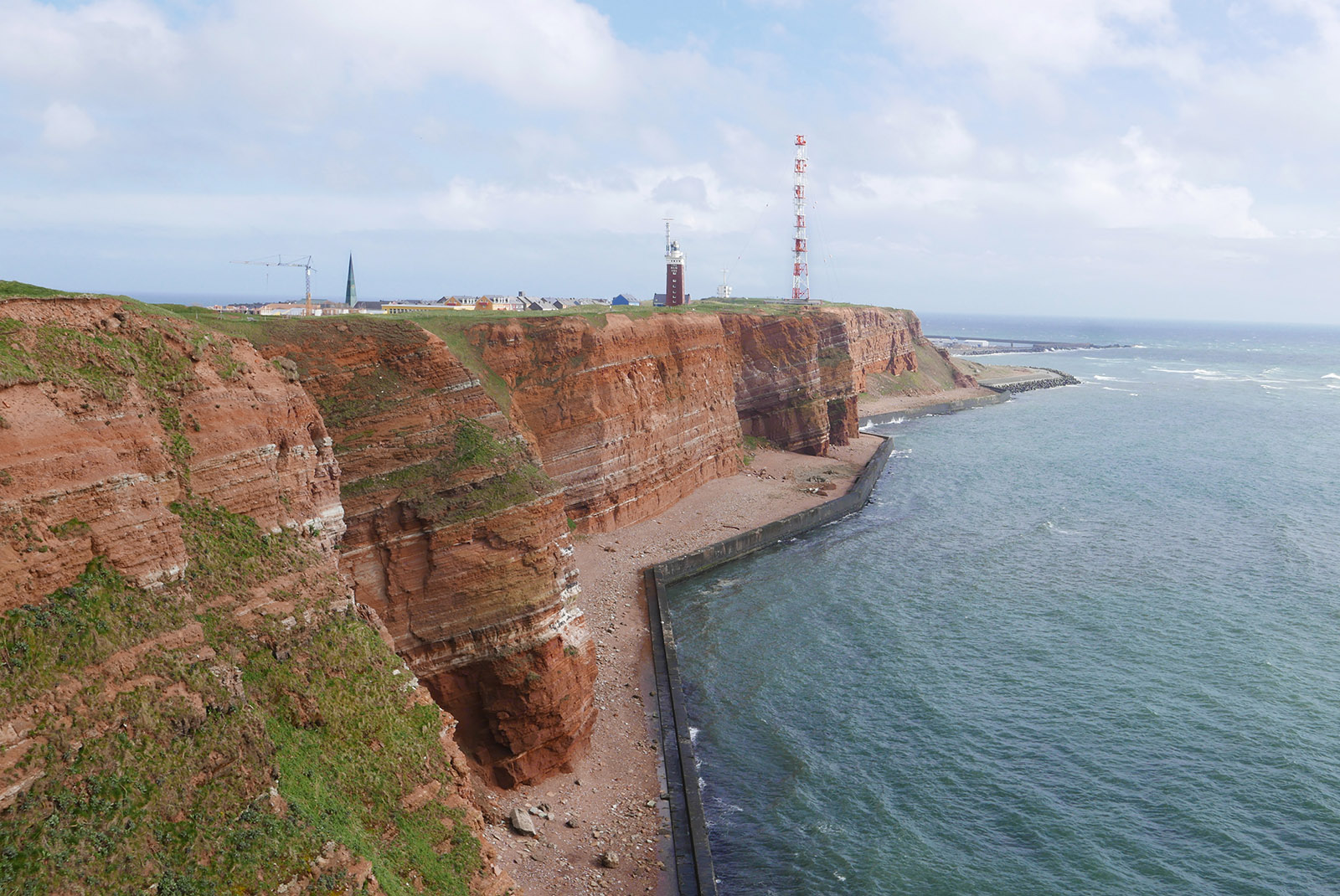 Helgoland, seventy kilometers out of the German coast, a double island. Sailing from the Northsea, a beacon towards the Elbe. As the crow flies the islands are about in the middle between Texel south and Skalligen north. A mild climate, moderate winters, plenty of sun, almost no pollen, so, “beneficial for modern city dwellers”, which became the advertisement. Inhabited in pre-historic times. Re-discovered by the Friesians in the 7th century, thinking they found the Holy Land. Later on home for fishermen, wreckers and moneymaking smugglers. Today Helgoland is relatively well to do. Special tax laws make tax tourism a profitable habit. Helgoland is home to a scientific institute (like the NIOZ at Texel), named after Alfred Wegener. In his footsteps arctic research is a favorite subject.

Spring 2016, a team of five: three artists, one naturalist writer, his partner -an avid bird watcher too-, and an engineer first timers. Two islands, one rising straight out of the see, glowing red, the other sinking in the sea, white. Two rocks, one still standing, the other dissolving. The high island like a watchtower overlooking the coast, central pivot in migratory routes for birds that visit the Waddensea. We were at the twin islands looking for traces of the early days of ecology and ornithology. Vague traces and minimal remains – it was hard to find anything. Helgoland seemed to be a (purposefully?) erased landscape, as a result of it’s function as a testing site from 1942 until 1952, when it was shelled by NATO allies by way of experiment. In the early 1950’s the displaced locals, with the help of a number of communist students, reclaimed and pacified ‘their’ Helgoland. Scientists followed in their wake. Former inhabitants returned and resumed fishing, lobster and crab. Tourists were next to go back, attracted by sea, sun, and wafts of perfume and other alcoholics. Though, there are tourists visiting the local musea, the now unlocked bunkers, the sea aquarium (too bad the leaking aquarium is closed for years). Some visitors carry the tools of their hobby, big camera’s and scopes for semi-professional birding.
During the the day the team ventured out in changing combinations, different perspectives hiking the miniature world of Helgoland, finding connections to history everywhere, some labelled by texts, others hard to recognize like bricks from demolished houses on the beach, rounded by sand and water. Towers connect the island to the outer world, Radar for military purposes, church for the spiritual connections, a rooftop tower to watch birds, the red sandstone island itself a tower, its walls covered by migratory birds, including one singleton, an albatross from the southern hemisphere. In the evenings we cooked a meal, no birds but seafood, and discussed the finds of the day. A year later each of us has digested this field research in his or her own way, we are glad to present the results.

Birdwatching The Takkenkooi is the oldest duck decoy structure on Terschelling, constructed around 1667, probably one of the first in the Wadden area. The other duck-catching structures on the island date from the 19th century. The Takkenkooi is privately owned and still in use. Over the years the shares have splintered, so that the structure […]